ENGLISH PREMIER LEAGUE WEEK 27 ROUND UP 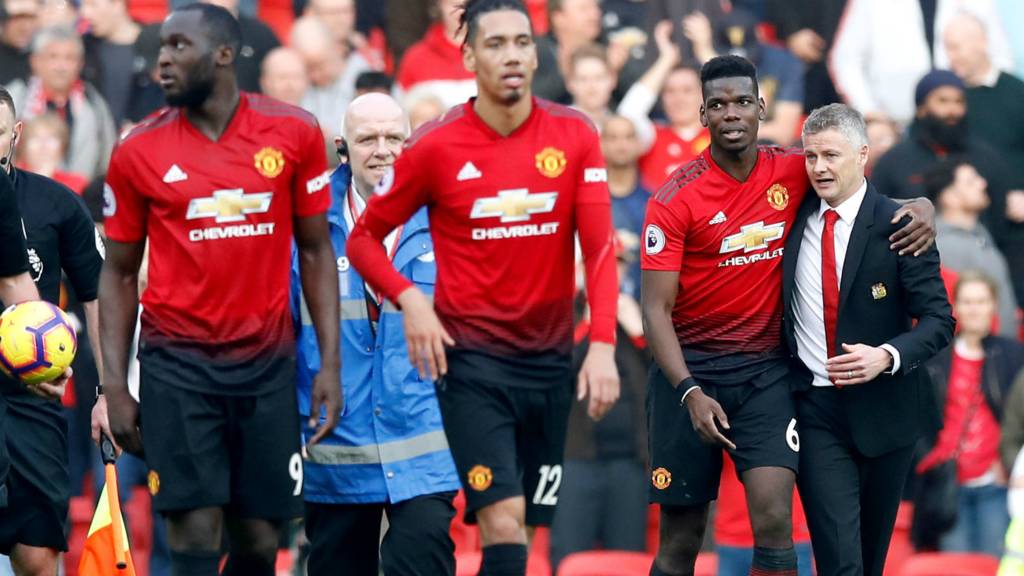 Amazingly the bore draw of the week came at Old Trafford where title contenders Liverpool and rejuvenated Man United met, this is always a clash of the Titans but much more was expected of both sides.

Liverpool got the point they needed to return to the top of the Premier League but was left frustrated by their failure to break down a Manchester United side that was ravaged by injuries.

A draw at the home of their fiercest rivals would usually be seen as mission accomplished for Jurgen Klopp’s side, but this has to go down as something of a wasted opportunity to get some daylight over nearest rivals Manchester City.

Injuries to three midfielders meant United were forced to use all of their substitutes in a bizarre 25-minute period before half-time with one of them, Jesse Lingard, quickly being replaced himself.

Liverpool did not escape unscathed, with Roberto Firmino only lasting until the half-hour mark, and without him, his side struggled to pose any sort of threat in front of goal in what was a typically intense encounter.

The constant disruptions made for a disjointed first half and neither side could truly find their rhythm after the break.

Klopp’s side failed to truly test United keeper David de Gea, with a shot from distance by Firmino’s replacement Daniel Sturridge their only shot on target in the 90 minutes.

United had the best chance of the game, but Alisson brilliantly denied Lingard after he ran on to Romelu Lukaku’s pass and attempted to go around the Reds keeper.

The hosts thought they had stolen victory near the end when Liverpool defender Joel Matip put through his own net from a free-kick, but Chris Smalling was adjudged offside in the build-up.

This result means that Liverpool moves a point ahead of Man City with 11 games to go.

Arsenal punished struggling Southampton with two first-half goals to move back into the top four of the Premier League.

The Gunners led when Alexandre Lacazette reacted quickest to turn in Henrikh Mkhitaryan’s shot, with the Saints’ claims for offside proving futile.

And they doubled their lead shortly after when Mkhitaryan drilled a shot into the bottom corner.

Arsenal should have scored more in a dominant first half, but ultimately it mattered little as those goals were enough to move Unai Emery’s side above Manchester United, who drew at home to Liverpool.

Saints, who missed good chances through Nathan Redmond and Matt Targett before each of Arsenal’s goals, offered more resistance after the break.

But they remain in the bottom three, a point adrift of fourth-bottom Cardiff, after failing to win for a fourth successive league game.

Spurs had a great opportunity to close the gap on Liverpool and Man City, but they fluffed their lines, as Burnley took all three points.

Chris Wood broke the deadlock for Burnley early in the second half as he rose to head home Dwight McNeil’s inswinging corner, his fourth goal in as many games.

Harry Kane, making his first appearance since 13 January, equalised after latching on to Danny Rose’s quick throw in and poking past Tom Heaton, before Ashley Barnes tapped in Burnley’s winner late on.

Burnley rise to 14th and are now six points clear of the relegation places.

Record Newcastle signing Miguel Almiron’s was the star of the show, Paraguay forward, who arrived for £21m from MLS side Atlanta United, helped Benitez’s side ease past 10 man team Huddersfield and move four points clear of the relegation zone.

After Newcastle missed several chances in the first half, striker Salomon Rondon swept in the opener 59 seconds into the second period.

Ayoze Perez drilled in the second, although Almiron could not add the goal his display deserved.

Huddersfield, who stay marooned at the bottom of the table, had skipper Tommy Smith sent off after 20 minutes for a high tackle on Almiron.

Three dubious penalties were awarded, in this game and the calls for VCR are growing (but not from me, I do not think that the game of football can handle the disruptions that will be caused by VCR, the goalline technology is a must and works extremely well, but leave the game alone, the passions, players mistakes, referees mistakes are all part of the great game).

Cherries striker Joshua King scored from the spot after going down easily under Joao Moutinho’s challenge, and then missed in the second half following a foul on Ryan Fraser.

Referee Roger East was at the centre of the action and turned down a penalty shout from the visitors when defender Chris Mepham misjudged clearance and the ball bounced off his arm.

But he did award Wolves a spot-kick when Adam Smith was judged to have brought down Matt Doherty, with Raul Jimenez coolly converting the equaliser.

The official also showed Bournemouth midfielder Jefferson Lerma only a yellow card for an elbow into the face of Moutinho.

The point was enough to move Eddie Howe’s side up to 10th in the table, six points and two places adrift of Wolves.

This was the first time in 19 years that Leicester has lost four league games in a row at the King Power Stadium.

Wilfried Zaha scored twice as Crystal Palace eased their relegation worries on a day when Roy Hodgson became the oldest man to manage in the Premier League at 71 years and 198 days.

In the first half of few chances, the Eagles broke the deadlock when Michy Batshuayi fortuitously deflected James McArthur’s effort past Kasper Schmeichel, Jonny Evans fired home Harvey Barnes’ low cross to equalise midway through the second half before Zaha ghosted in at the back post to retake the lead for the visitors.

Luka Milivojevic then scored from the spot after Evans clumsily brought down Jeffrey Schlupp and Zaha added a fourth in injury time to make the points safe for Hodgson’s side.

Watford’s incredible surge for a European place seems to be more believable after this demolition of Cardiff.

Gerard Deulofeu put Watford in front on 18 minutes before two goals in the space of as many second-half minutes ended any hope of a fightback from the hosts, who played a role in their own downfall with some woeful defending.

The Spaniard opened the scoring after Bruno Manga gave the ball away, and doubled the advantage after a quick counter-attack. He completed his hat-trick after Harry Arter surrendered the ball timely.

Deulofeu then set up Troy Deeney for a tap-in as Watford took a 4-0 lead.

Cardiff did manage a consolation goal when Sol Bamba bundled home, but the four-goal margin was restored when Deeney scored his second from Will Hughe’s cross in injury time.

The victory sends Watford up to seventh while Cardiff remains 17th, though they could return to the relegation zone over the weekend.

Javier Hernandez’s controversial goal with his arm contributed to Fulham’s 18th Premier League defeat of the season as West Ham fought back from behind to win at London Stadium.

On initial viewing, it looked like Hernandez had headed in from a yard to punish goalkeeper Sergio Rico’s mistake, but a replay from behind the goal clearly showed the Mexican striker converting with his arm.

Hernandez’s equaliser was followed by Issa Diop’s towering header five minutes before half-time and Michail Antonio nodded in a third late on.

The visitors had started brightly and got off to the perfect start after just three minutes through Ryan Babel’s close-range finish.

Looking to get back into the game in the second period, Fulham skipper Tom Cairney had a low shot smothered by goalkeeper Lukasz Fabianski, their only real chance of note.

West Ham move up to ninth but Claudio Ranieri’s side stay in 19th place, eight points adrift of safety.

In my predictions, I got four correct results, not my best week!

Have a good week,